For two decades, the owners of Mahockney have conducted research to answer a mystery: the exact year that Robert Tomlin, his widow Rebecca or daughter Martha constructed the original part of the house.

Here’s what the historical record tells us: Tomlin bought the property in 1671 from the original patent-holder Rosson, who likely had not settled it yet, and Tomlin’s daughter Martha had been living in “the house” for “many years” at her death in 1722, in the words used in court deeds. However, the south-side entry hall and parlor (first-floor on your left as you approach the house) is consistent with late 17th-century architectural styles of Tidewater settlers. Early builders were prone to recreate the familiar Jacobean forms: English-bond brick over a stone pile, steep roofs, casement windows, and massive buttressed chimneys. Mahockney’s south-end structure incorporates these elements, including the strikingly unique double-chimney that rises above the southern face.

Situated well out in a gently rolling field on Mount Landing Road, lies Mahockney. The house currently [is] surrounded by a few large sycamore trees and fields in all directions. An extensive slope behind the house leads to a seven-acre pond and wetlands which feed Mt. Landing Creek.

Mahockney was built in three stages. The original structure, as discovered through extensive investigation by former owners Ted and Shan Rice, is a one and a half story frame section. The section was changed to a gable style roof and raised to a full two stories…

A large frame addition on the back followed in the 1900s.

A very unusual aspect of the architecture are the chimneys. The chimney for the brick section of the house extends fully to one corner of the house and forms closets for the basement, first and second floors. The chimney for the original frame section begins as a single eight foot wide structure, then half way up divides into two separate chimneys. A small “Wine closet” built between these two sections in the interior contains some of the house’s little remaining woodwork.

Other interesting features of the house include a herringbone style brick floor in the basement, hand carved frames of the Cross and Bible doors, a closed paneled stairway from the front hallway, and a total of seven fireplaces. [end of excerpt]

However, several earlier sources have the north-end brick structure as the “period-one” original building. According to a recently reviewed 1971 “Architectural Survey Form” filed by the Virginia Historic Landmarks Commission, the brick structure dates back into the mid-1700s at latest. An excerpt:

Date or Period: 1765, 1820.  Historical Significance: Although the left side of the house appears to have outside weatherboarding [and] the right side of brick construction, actually the entire house originally was built of brick. It was called “Mahockney” in 1765 [note: earlier uses of the name have been found since this 1971 report]. The actual date of the house’s building is not known, but the Mahockney property, of 1,154 acres, was bought from William Roane’s estate by Thomas Gouldman Waring of “Goldberry” as a gift for his nephew, Wm. Catesby Latane, who in 1816 married Anne Elizabeth Burwell. Latane was a grandfather of Mrs. Judith S. Shaw of Chance, Va., who verified the data in this report, she having visited here many times. In 1820 Mr. Latane added to the [brick] structure a two-story frame house with dormers. [end of excerpt]

Similarly, in this excerpt from the 1957 book Old Homes of Essex County, published by the Women’s Club of Essex County, the architectural discussion places “period-one” as the brick northern side:

The original two-story house with basement is built of brick laid in old English style. The unique chimney extends to the corner of the house on one end and forms closets for the basement and for a first floor room. The windows have segment arches above; they have nine panes of glass in the lower sash and six in the upper…

It is not known when and by whom this house was built, [but] in 1820 Mr. Latane added to the old brick building a two-story frame house with dormer windows. The chimney of this section is most unusual. It is eight feet at the base and about half way up it divides and branches into two tall chimneys. Dividing the front and back halls is a handsome hand-carved archway. The frames of the Cross and Bible doors are handcarved and a closed, paneled stairway leads from the front hall to the upper floors. The basement has two large rooms with fireplaces, a lock room, wine cellar, and potato cellar. The floors are of brick laid in herringbone style. [end of excerpt]

In any case, the paired cellars each share brick foundation walls, with a segment of bog-iron stone, locally mined on the property, on the south foundation below grade. The south-end high-ceilinged English basement with fireplace, root cellar, and wine cellar, retains pit-sawn beams bearing carved Roman numerals. Traces of whitewash

remain, providing evidence that the basement was living space. The mortar is of lime and oyster shell. Plaster is of horsehair and oyster shell. Rafters are of mortise and tenon throughout the north and south structures.

The original English-bond brick on the south-end structure was covered with beaded weatherboard, still visible today on the first floor. The south-end structure was undoubtedly built with a dormered roof, converted to a gable roof in the 19th century as evidenced by the late 19th-century photograph seen above. When the dormered room was converted, plain weatherboard was used on the second story. 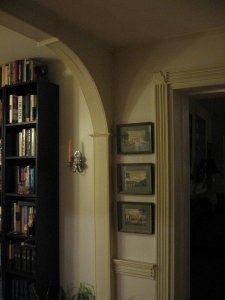 On the first floor, while heart-pine flooring is throughout the house, the irregular planks in the formal parlor run the entire length of the room, demonstrating the builder’s elegance and wealth.

The period-three frame structure was added in the 20th century (c. 1910). This addition included a master bedroom, dining room, kitchen, pantry and side porch. The expansive front porch was also a 20th-century addition. 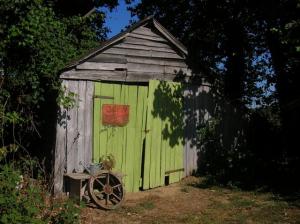 Small non-contributing structures stand several yards to the north-east of the house, and in the early 20th century were converted for use as garages.

Click here for photos and descriptions of ongoing Mahockney preservation and restoration projects.

The plantation reflects the changing building styles of America’s three centuries, as it met the needs of the growing families who called their home Mahockney.