On the Attribution to Charles Bird King 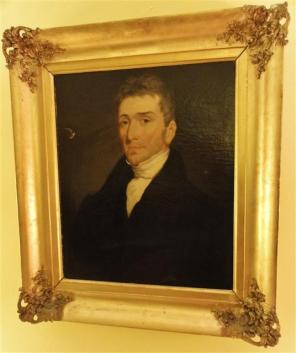 en purchased for Mahockney in 2010, the John Tyler portrait was unsigned but bore a tag (below) from the gallery attributing the work to Charles Bird King. However, the gallery owner did know that the painting had been purchased three years before, from the noted Richard Wheeler, a Fredericksburg art dealer.

On Dec. 19, 2010, we paid a visit to Mr. Wheeler, who said the following: “I bought the portrait five or so years ago (c. 2005) from a man whose name I can’t presently remember, but who was known for finding quality art from estate sales and private collections. He told me this painting came from a private home in Washington DC, or perhaps Alexandria (Virginia), but he had no other provenance records.” 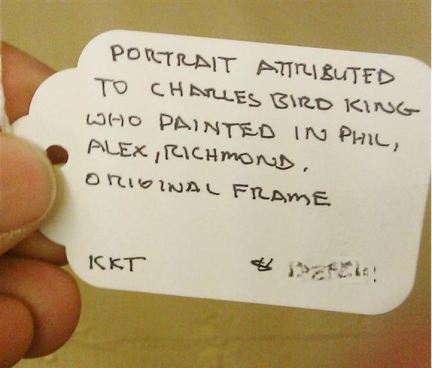 On the attribution to Charles Bird King, Wheeler said, “I made that attribution, for several reasons. I have seen many King portraits, almost purchased one well-documented King portrait of a young girl years ago, and know the work of his contemporaries. This painting itself very much looks like King’s work to me, the brushwork, style, and quality. Secondly, the subject is very similar to many of his early Virginia and Washington portraits, many of which still are in private hands and sold in private transactions. This is very much a King-style portrait…”

Wheeler continued: “Also, the frame itself instantly said to me that this is likely a King painting. The frame is obviously original, and the frame-maker, though his name escapes me at the moment, is where King got all of his frames, or the vast majority of them anyway when working in Washington or Richmond. The maker did frames for other painters, but he is very much associated with King.”

Go to this page to compare the Mahockney “attributed to King” portrait visually with other known King works from the early 19th Century.

From Wikipedia Bio of Charles Bird King
“Charles Bird King (1785–1862) is a United States artist who is best known for his portraiture…  At age twenty he moved to London to study under the famous painter Benjamin West at the esteemed Royal Academy. King returned to the U.S. due to the War of 1812 after a seven-year stay in London, and spent time working in Philadelphia, Baltimore, and Richmond. He eventually settled in Washington, due to the economic appeal that the burgeoning city offered. In the nation’s new capital, the artist earned a solid reputation as a portraitist among politicians, and earned enough to maintain his own studio and gallery.  King’s economic success in the art world, particularly in the field of portraiture, had more to do with his ability to socialize with the wealthy celebrities, and relate to the well educated politicians of the time: “His industry and simple habits enabled him to acquire a handsome competence, and his amiable and exemplary character won him many friends.”  These patrons included John Quincy Adams, John C. Calhoun, Henry Clay, James Monroe, and Daniel Webster. In fact, King’s popularity and steady stream of work that was dependent on his location in the capitol left him with little reason or need to leave Washington….”

Examining the timeline for overlaps in geography between painter and subject:

It appears that King might have painted John Tyler in one of two periods:

1812-1817 “King spent several years as an itinerant artist, setting up his easel in Philadelphia, Baltimore and Richmond” – Cosentino. “During this time he painted several of his finest pictures. His William Pinkney can be dated to about 1815; it was undoubtedly painted in Baltimore, where King resided off and on into 1817.

1815-1816 Lives in Baltimore but travels to Washington, Newport (on death of grandfather Bird), Philadelphia, New York

1819 John Adams comments on King in his diary, noting “he is one of the best portrait painters in the country, little inferior to Stuart.”

1824 Washington. Cosentino: “By 1824, King owned a home and had built a studio and large gallery in Washington, as noted by Dunlap and Sully, and owned lands and buildings there from which he collected rents. Also, from the time he settled in Washington, he was kept busy with numerous private and governmental portrait commissions…”

1820s: Cosentino: “the portrait of Mrs. John Quincy Adams in the National Collection of Fine Arts, painted in the early 182os. When compared to the Calhoun, it appears a virtuoso piece, more brilliant perhaps, but less probing. As usual the portrait is unsigned and undated, but it seems validly attributed to King”

1829: “The Castle Builder is significant among King’s extant works, however, in that it is clearly signed and dated on the face of the painting- on the table’s edge – “Painted by Charles B. King 1829”

Note: John Tyler was a scion of a prominent and wealthy Virginia family – thus a perfect and demonstrated candidate for portraiture early in life, at the time King was painting in Richmond (1814-17 or so).