2012 Renovation, including “The Sub-Floor Pit”

The south basement may be the oldest space in the Mahockney house, and features a building style and materials consistent with late 17th-century or early 18th-century techniques.

The high-ceilinged English basement features a large kitchen fireplace, sub-floor pit, and pit-sawn beams bearing carved Roman numerals. Traces of whitewash remain, providing evidence that the basement was living space. The mortar amid the English-bond brick walls is of lime and oyster shell, the plaster of horsehair and oyster shell. The numbered, hand-hewn beams include mortise and tenon joins.

During the second half of the 20th century, the fireplace opening was bricked up, pneumatic poles were installed as “temporary” support for ceiling beams, and a large HVAC unit was installed squarely on the filled dirt patch in the center, dominating the room (note: before excavation work in 2012, there was no documentary evidence of a sub-floor pit). A maze of ducting, electrical wiring, and crisscrossed plumbing pipes obscured the space, with some pipes punching holes through the original brick walls.

A substantial 2011-2012 restoration project in the south basement, sensitive to the historical aspects and led by restoration craftsman Gordon Wilkins,  addressed several issues of restoration and renovation.

The ceiling beams were carefully reinforced allowing the removal of support poles, the fireplace was unbricked and cleaned, and plumbing pipes were switched out for smaller-profile elements and rerouted, with brick-wall holes patched using historically 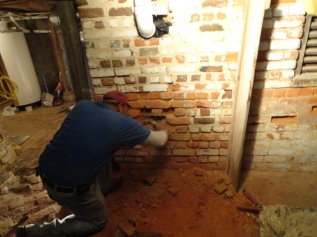 Removing the 20th-century HVAC unit, which had been placed by the hearth atop what appeared to be a rectangular dirt floor in the center of the room, allowed the beginning of a second phase in the project.

After a new modern HVAC system was installed in a separate adjoining space, attention turned to the dirt floor.

The size and configuration of the dirt area in the south basement, along with its placement by the fireplace hearth, had sparked speculation that it was actually a filled “sub-floor pit,” a feature of several high-profile efforts in historical archeology in the

Chesapeake Bay region over the past thirty years.  Some sub-floor pits were root cellars placed “in front of the hearth, where the radiant heat would help keep root vegetables from freezing, [often with an] attached dairy cooling pit,” to quote a report on excavated pits at King’s Reach Plantation (circa 1690-1715) (Dennis J. Pogue, “Spatial Analysis of the King’s Reach Plantation Homelot,” Historical Archaeology, Vol. 22, No. 2, 1988). Several pits have been identified at colonial slave sites in Virginia (e.g. in slave houses at Monticello and Montpelier), but one scholar argues that “the presence of a sub-floor pit should not be taken as prima facie evidence of root storage, storage of valuables, or of African-American occupation” and points out that sub-floor storage was also an English practice, and that colonial American sub-floor spaces are still not fully understood (Richard H. Kimmel, “Notes on the Cultural Origins and Functions of Sub-Floor Pits, Historical Archaeology, Vol. 27, No. 3, 1993).

The research design for the Mahockney south basement pit included an initial shovel-test and metal-detection survey, a rough division of the area into foot-wide target segments for surface shovel-shaving and careful hand-trowelling below, and dry-screening all dirt using ¼” mesh screens.

By the first week of 2013, the entire dirt-fill space has been excavated, revealing an impressive plastered-brick-lined and dirt-floored sub-floor pit. The pit edge is 42” from the fireplace, across the hearth, and 40” from the west wall. The pit 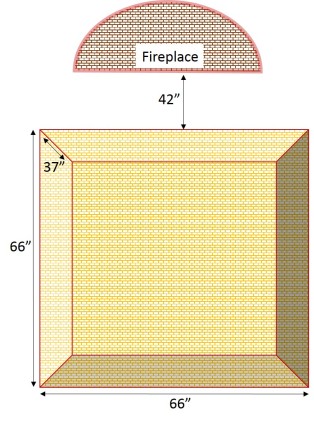 compartment is surrounded by a buried single-brick-thick inner wall which itself rises to the top of the pit; the pit measures 66” x 66” and is a full 37” deep.

The pit fill had low layers of dark, ashy soil (note the proximity of the hearth) but mostly the fill was compacted clay-based dirt. All of the fill has been excavated using hand trowels; 100% of the dirt was dry-screened using ¼” screens. Nearly 100 artifacts have been collected from the pit-fill excavation, and were piece-plotted prior to removal. The majority of the historic artifacts were domestic household debris (ceramic shards and fragments, small bottles and bottle-glass, buttons, etc.) or architectural materials related to the house (cut and wrought nails, bricks, hinges, etc.). Other artifacts included bone, several teeth or animal tusks, and oyster shell.

Study of the sub-floor pit continues in 2013, along with dendrochronology of the south basement’s wood beams to aid in dating the original construction.

Click here for more images before and during the work in progress: