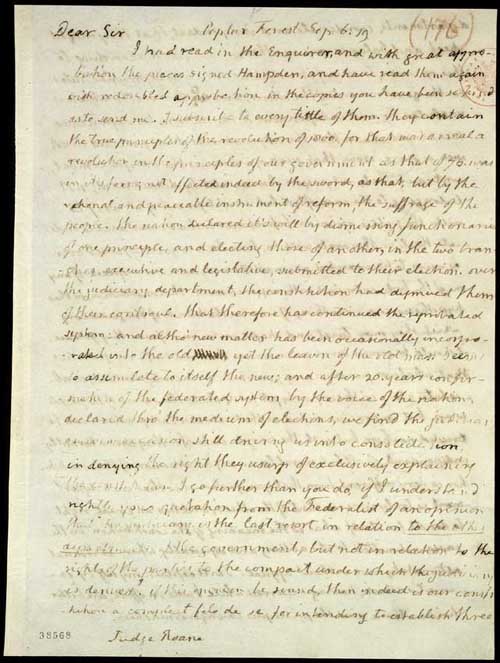 I had read in the Enquirer, and with great approbation the pieces signed Hampden, and have read them again with redoubled approbation in the copies you have been so kind as to send me. I subscribe to every tittle of them. they contain the true principles of the revolution of 1800. for that was as real a revolution in the principles of our government as that of 76. was in it’s form; not effected indeed by the sword, as that, but by the rational and peaceable instrument of reform, the suffrage of the people. the nation declared it’s will by dismissing functionaries of one principle, and electing those of another, in the two branches, executive and legislative, submitted to their election. over the judiciary department, the constitution had deprived them of their controul. that therefore has continued the reprobated system: and altho’ new matter has been occasionally incorporated into the old yet the leaven of the old mass seems to assimilate to itself the new; and after 20 years confirmation of the federated system by the voice of the nation, declared thro the medium of elections, we find the judiciary on every occasion still driving us into consolidation. in denying the right they usurp of exclusively explaining the constitution. I go further than you do, if I understand rightly your quotation from the Federalist of an opinion that the judiciary is the last resort in relation to the other departments of the government, but not in relation to the rights of the parties to the compact under which the judiciary is derived. if this opinion be sound, then indeed is our constitution a compleat felo de se for intending to establish three. . .

Image of it is from http://www.loc.gov/exhibits/jefferson/jefffed.html