Tux back in the summer, merely a cute kitty and mouse-killer, not yet the rabid human-killer-wannabe

2011, Nov. 19:
Back in the spring of ’11, cute little black-and-white kittens were discovered playing at the side of the old shed on the north-east corner of Mahockney.

We fed them. They grew. In time, they developed rabies.

This was discovered when the smallest – nicknamed “Tux” for his black coat and white feet – went berserk and attacked us. Lewis had only a couple of tiny scratches on a finger, with which he had innocently been gesturing “Here, kitty kitty.”  Kathryn unfortunately bore alone the brunt of a full frontal assault, when Tux invaded the house, went full-tilt crazy, attacked Rawson the Tibetan Terrier dog, and then lept onto Kathryn’s leg and clamped in a biting death-grip. Only brute force and a massive handbag enabled Kathryn to beat back the beast.

Animal Control captured, beheaded, and tested the cat – positive for rabies. As of this writing, unvaccinated rabies is “100% fatal.”

At the hospital within an hour, Kathryn received not one, not two, but forty injections, a variety of vaccine and immuno-globulin shots. The next day Lewis only had to get ten.

The fine folks at Riverside Tappahannock Hospital’s Emergency Room were a great help, as were the Centers for Disease Control, Southern States Hardware down in Hobbs’ Hole, and most effectively John Lee, Essex County’s Animal Control Officer.

The lasting lesson for Mahockney is: don’t feed stray or feral animals.

Some photos from happier times: 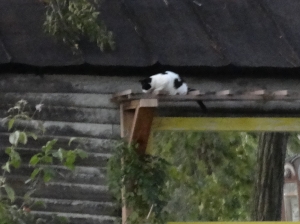 Charlie on the prowl