We continue to do metal detection across the lawns and fields surrounding the manor house at Mahockney. The most productive effort was in the early Spring of 2013, in what is now considered “the front yard” and in the meadow just south-east of the house. 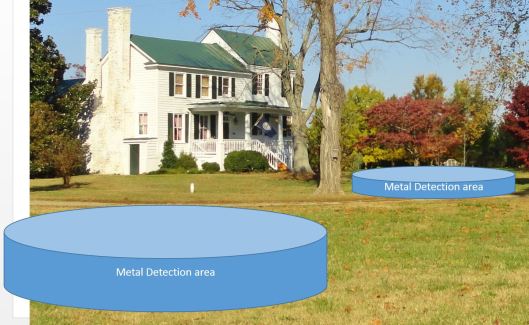 Four ancient buckles were among the items found that session, along with assorted buttons. The buckles in particular (see right) were believed worthy of further research.

To learn more, and to assist in attempting to date the buckles, a copy of the standard British bible in this field was procured: Buckles 1250-1800, by Ross Whitehead (Greenlight Publishing, 1996); I’ll refer to it a

s “Whitehead” below when citing it.

As the book’s summary explains, “With over 800 illustrations this book is intended to help with the identification of buckles, which are by far the largest category of medieval and post-medieval dress accessory to survive.”

Below we’ll examine the Mahockney buckles in what appears to be chronological order. 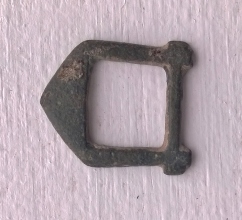 The first buckle, 23mm x 20mm, has a cast copper-alloy, single loop rectangular frame. According to Whitehead, “Amongst the plain buckles, those with stout medium sized rectangular frames are the most common. These buckles span the 14th to 17th centuries, and individual examples cannot usually be closely dated.”  Buckle One appears to match a particular description in Whitehead’s catalog:

“The fashion for ornamental buckles during the 16th and 17th centuries is reflected in the large number of decorative sub-rectangular buckles produced during this period. These buckles fall into two main groups. The first [likely including Buckle One] had flat frames with a narrowed strap-bar and rounded or pointed front which is often notched to receive the pin.” Many, if not most, of the buckles from this period and of this type have “lobed knops” as the feet of the buckle (right-side edge in above photographs).

The date range given for buckles of this type: 1500 – 1650. Note: Mahockney’s original colonial English settlers arrived mid-seventeenth-century and were actively trading goods back & forth to England throughout the remainder of that century, when buckles of this type would have been common in Virginia.

There doesn’t appear to be an exact match among Whitehead’s photographs, but below are some closely similar examples, with Buckle One included for comparison (click photos to enlarge): 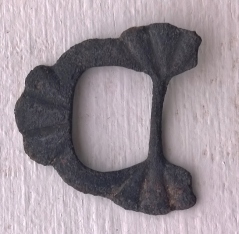 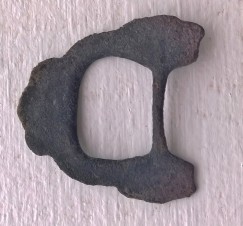 Buckle Two measures 28mm x 28mm… and is a cast copper-alloy loop with molded floral decoration on the loop’s edges. However, comparing it to Whitehead’s exemplars, it seems obvious that this buckle is actually a broken half, one side of a so-called “Spectacle Buckle.”

Per Whitehead, “Spectacle Buckles are double looped buckles with oval loops. They are also known as ‘figure of eight’ buckles.” As seen below, this Mahockney buckle is a precise match for (half of) one particular Whitehead model; with its missing half it would match the 45mm x 28mm size.

In Whitehead’s description, this is “one of the most distinctive groups of spectacle buckles [with] moulded decoration which is based on highly stylized floral designs.”

The precision of the match with Whitehead’s model makes the date-range quite significant, as it firmly places the Mahockney human wearing it in a specific time period.  To quote Whitehead,

“There is little firm evidence for the existence of these buckles before the middle of the 14th century. However, during the 15th and 16th centuries they gradually replaced single looped buckles as the most widely used fastening on personal dress…Spectacle buckles were at their most popular between c1450 – 1650. After this period they were gradually superseded by other types of buckle, and had largely fallen out of use by the early 18th century.”

Mahockney’s human presence in the colonial English period dates from the original patent in 1663, with the area farmed almost immediately. The original existing brick foundation was laid likely by 1671 by Robert Tomlin, whose family owned the property well into the first quarter of the 1700s – which means that the Spectacle Buckle Two (like Buckles One and Three) is almost certainly a Tomlin buckle.

Buckle Three, 23mm x 18mm, is an asymmetrical cast copper-alloy double loop with moulded decoration on the loops; it appears to be tinned as well, as was common – Whitehead explains that most buckles of the era were given some form of surface protection, usually tin. (Gilding and silvering were rare before the 18th century.)

Whitehead dates these buckles to c1575 – 1700, and points out that “many of these later buckles are of small to medium size and probably served as spur buckles… The fashion for wearing spurs as part of normal outdoor dress probably accounts for the large number of 17th century types, as this fashion endured for most of the 17th century.”

Buckle Three from Mahockney is an identical match to Whitehead’s “No. 577,” which he counts among the “more elaborately decorated buckles” of the period, with six lobed (molded) knobs on the rectangular edge and symmetrical decorative protrusions at other points. 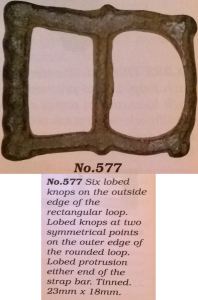 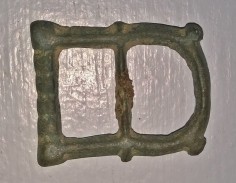 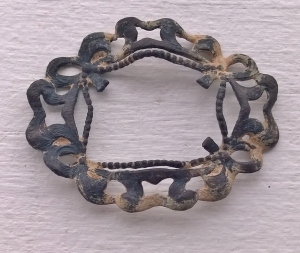 Buckle Four measures 45mm x 38mm, the largest among the Mahockney buckles recovered in 2013, and is also the most distinctly decorative in design. While it has no precise match in Whitehead’s definitive catalog, many of its features allow fairly precise dating to the 1720 – 1750 period.  Mahockney’s human timeline thus firmly places Buckle Four in the Bannerman / Bagge / Seayres era – each of whom were married successively to the same stylish woman, Katherine (nee Barker), who was fond of shopping at the upscale markets in bustling merchant-town Urbanna.

(It is also possible, though less likely, that the buckle belonged to and was even designed by Lawrence McDuff, a Londoner and silversmith with offices in Philadelphia, who mysteriously laid claim to Mahockney Plantation several times during the 1750s-60s, only to have his claim escheated to William Roane during the Revolution.)

Buckle Four is annular (ring-shaped) and of tinned cast copper-alloy.  Per Whitehead, those features and its size combine to place it likely before mid-century; “Shoe buckles increased in size throughout the 18th century. By the 1760s they had reached an average of 65mm across the frame. [Buckle Four is only 45mm across.] They attained even greater proportions (up to 100mm across the frame) following the introduction of large and highly curved shoe buckles by the French ambassador the Comte d’Artois in 1777.”

Also, “Rococo designs with rosettes, ropework, beaded borders, nailheads and grooves [all features of Buckle Four] appear in the 1730s,” but got more exaggerated as the decades passed; the examples shown by Whitehead from the latter half of the century are considerably more elaborate and complex.

It’s a practical certainty that Buckle Four is from the 1700s; again quoting Whitehead, “Shoe buckles fell from fashion during the 1790s when long trousers began to replace breeches and tights,” and by 1800 were generally only seen on ceremonial uniforms.

Judging from Whitehead’s examples, Buckle Four is most similar to his No. 690 or No. 701, see photos below (click to enlarge). 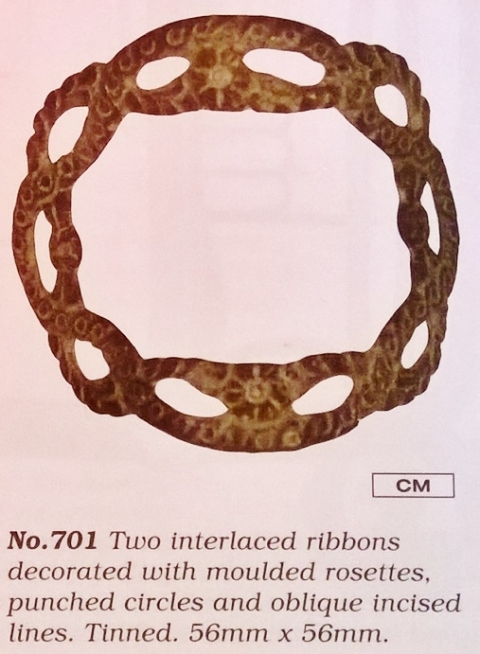 Summary: Metal detection and archaeological research will continue at Mahockney, in search of more historical traces of those who came before.

2 thoughts on “Buckles and History at Mahockney”